Urban Optics and the Specter of a Beautiful Metropolis

Struggling to comprehend the formless industrial metropolis, most architects and planners set out to envision a new city, while an alternative discourse used the existing city to redesign vision. One such trajectory runs from the impressionist gaze of August Endell in Berlin and Munich, to the abstracted vision of Wassily Kandinsky in Munich and the Bauhaus, to the psychological optics of László Moholy-Nagy at the Bauhaus and later in Chicago, to Reyner Banham’s motorized lens of Los Angeles. Practicing at different periods and in distinct cultural milieus, they, nevertheless, all deployed a recalibrated visual lens to extract potentials from territories of the city that span from the ugly to the ordinary—constructing an aesthetics in which conditions of the formless city were no longer solely seen as problematic but became understood as productive. Here, imagination was linked most clearly to acts of perception and observations of the existing city, and, consequently, less to mental images of foresight and more to advanced concepts of eyesight. 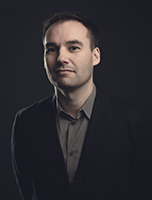 director of the Visionary Cities Project