Looking for a course? Check out our online brochure for Germanic Studies.
Click to see our courses! 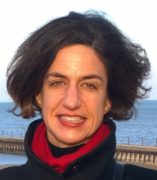 My research explores the ways in which the imaginative arts (in particular, literature and film) offer a unique window onto broader social constellations and cultural paradigms. An attention to aesthetic form (i.e. metaphor, metonym, intermediality, temporality) opens a window onto the the parameters of social and political structures that are often camouflaged in the real world, enabling us to imagine alternatives to seemingly entrenched cultural norms and biases. Thematically, my scholarship has focused on gender and sexuality, on kinship, on queer aesthetics, on affect, on the aesthetics and ethics of the nation-state, on intermediality, and on temporality. I concentrate largely on the cultural spaces of Germany and Austria (from the Enlightenment to the present), though my work is frequently comparative, taking into account the American cultural space as well as the broader European context. I am interested in canonical, experimental and popular works alike. My research is informed by a variety of theoretical and philosophical schools, including continental philosophy, psychoanalysis, Marxism, the Frankfurt School and Critical Theory, gender theory, queer theory, and postcolonial theory, and I am interested in methodological approaches that engage in creative dialogue with diverse theories in order to discover new potentialities within imaginative works.

I serve in a variety of roles in professional academic organizations: as Vice President of the Goethe Society of North America; on the MLA Forum
Executive Committee on 18th- and early 19th-century German literature and culture; on the governing board of the Lessing Society; and on the
executive committee of the Austrian Studies Association. I am currently on the editorial advisory boards for *The Goethe Yearbook*, *The Lessing
Yearbook*, the *Journal of Austrian Studies*, the “New Studies in the Age of Goethe” Bucknell University Press book series, and the “New Directions
in German Studies” Bloomsbury Press book series. I have formerly served on the editorial board for *Pacific Coast Philology*.

2016, Dean's Award for Faculty Research in the Humanities: “Sissi’s World: The Empress Elisabeth in Memory and Myth”, UIC College of Liberal Arts and Sciences

2015, Dean’s Award for Faculty Research in the Humanities: “Before the Family: Kinship in the Early Enlightenment German Novel”, UIC College of Liberal Arts and Sciences